Every book has its story… 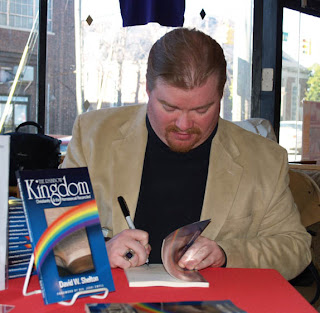 This Sunday’s book signing at Nashville’s OutLoud! bookstore was a great success, and it was so wonderful to see some people who came out to see us! I’m so grateful to OutLoud to hosting the signing, and I know it will be among the first of many for The Rainbow Kingdom: Christianity & the Homosexual Reconciled.
However, I must confess that I’ve not really done too great of a job in telling the story behind the book! My wonderful publicist, Sally Portner-Miller, has been so gracious during this process, that I want to publicly thank her for all she’s done. In truth, she is almost as responsible for this book’s publication as I am. Sure, I wrote it. But, as they say, there’s more to the story…

You see, it was back around August or so last year when I began working on this project, almost on a dare… you guessed it… from Sally. She and I had spoken about various projects over a period of time, and at the time, she was publishing a small Christian newspaper in northern Illinois, where she lives.

Christian Living was committed to showing both sides of every issue that affected the Christian community in that area. She once even ran a completely neutral article on gay marriage that “stuck to the facts” and avoided any of the religious issues. You can imagine the immediate backlash. However, the paper survived to go on for quite some time.
Sally told her story to Joseph Brant of Out & About Newspaper in Nashville a few weeks ago, and published his article on the story here. After riding the storm of her “gay marriage” article, she felt it was time to include a voice of a gay Christian. Because of our friendship, she invited me to write a column on the topic. I was delighted to help out a friend.
So I sent her an initial draft of about 3500 words. She politely said that I needed to cut out all but about 500 words for my piece. So I took out my verbal hacksaw and edited it down to a small enough article that eventually published in October. The article simply asked the question, “Can a person be gay and Christian?”
She had no idea how quick or how severe the backlash would be. Brant writes:

“Within hours of the paper hitting the racks,” Miller continues, “phone calls and e-mails poured in damning me for ‘condoning evil’ and ‘propagating Satan’s agenda.’ Within a week, David and I began to joke about the ‘drive-by damnings’ that I was getting, people who would call and say, ‘I rebuke you in the name of Christ!’ then hang up. One church had a prayer-relay in which members took turns calling my office every hour during business hours to pray over the phone at me.”

I remember these phone calls. She never once got discouraged or upset. We laughed about it, but I could tell that they did affect her. The newspaper is sadly no longer in publication. I regret that a single article reveals such a cold and hateful response from people who are called by Christ to show love. Alas, she knew it would happen. In the midst of all the backlash, Brant continued, there was a lone voice of support:

Miller reports the single upside to her experience. “In the midst of all that ‘Christian love,’ one quiet and short e-mail came through: a young man who wrote, simply, ‘Thank you. You have no idea how much I needed that column. You may have saved my life.’

Because of this, she strongly encouraged me to write the book. Her story was enough to motivate me to do exactly that. She didn’t have to pry too hard. People like that one young man who wrote her are just the kind of people who need to know that there is indeed hope, and that God does not condemn those that are in Christ (Rom. 8:1).
So thank you, Sally. Thank you for all of your sacrifices and your support. I couldn’t have done it without you.
Tagged with → Christianity and Sexuality • homosexuality • The Rainbow Kingdom
activism AFA American Family Association announcements Barack Obama bigotry Bryan Fischer Christian Community Church of Clarksville christianity Christianity and Sexuality civil rights don't-ask-don't-tell Exodus International FRC gay christians gay marriage Grace homosexuality Humor Jesus liars marriage equality Peter Labarbera Religion sexuality Ted Haggard tennessee the Bible The Rainbow Kingdom Tony Perkins